Quincy. The Wine, Not the 70s Television Series

For several years now when asked what my favourite wine is I have answered that it is Quincy, Q-U-I-N-C-Y from the Loire valley. I always have to spell it as most people think they misheard me. In preparation for this blog I wondered to myself why I continue to say this as I like many other wines probably just as much. I suspect that the wine snob in me says it because it's a bit niche and not many people will have heard of it and that makes me look cleverer and more knowledgeable than I really am. Yes I know, terrible isn't it.

Of course when you say Quincy to most Brits and probably Americans even more they will immediately think of the television series starring the erstwhile Jack Klugman as the often harassed Los Angeles County medical examiner. The tv series continues to run on repeat in the UK to this day and remarkably Jack Klugman is still with us aged 90. And of course everyone remembers the titles with the fainting coppers.

Anyway I seem to have strayed far from the basis of my blog and that is AC Quincy is really rather beautiful wine. Not a huge amount is made, particularly in comparison with nearby Sancerre, an appellation that is famous throughout the world. According to The Wines of Central Loire website total production of Quincy in 2010 was 15,915 hl compared with 175,108 hl in Sancerre. i.e. Less than 10%. And you won't see Quincy in shops very often, to find it you will need to go to a decent wine merchants or possibly Waitrose or Marks & Spencers. But I think it's worth the trip, at least just once as it gives you all the same great characteristics as a decent Sancerre, with fresh acidity and lots of citrus fruits and grapefruit. And better still, it offers better value than Sancerre. At the present time a case of 6 Domaine Bailly Quincy 2010 from M&S will cost you about £11 a bottle which is certainly cheaper than a similar standard Sancerre. 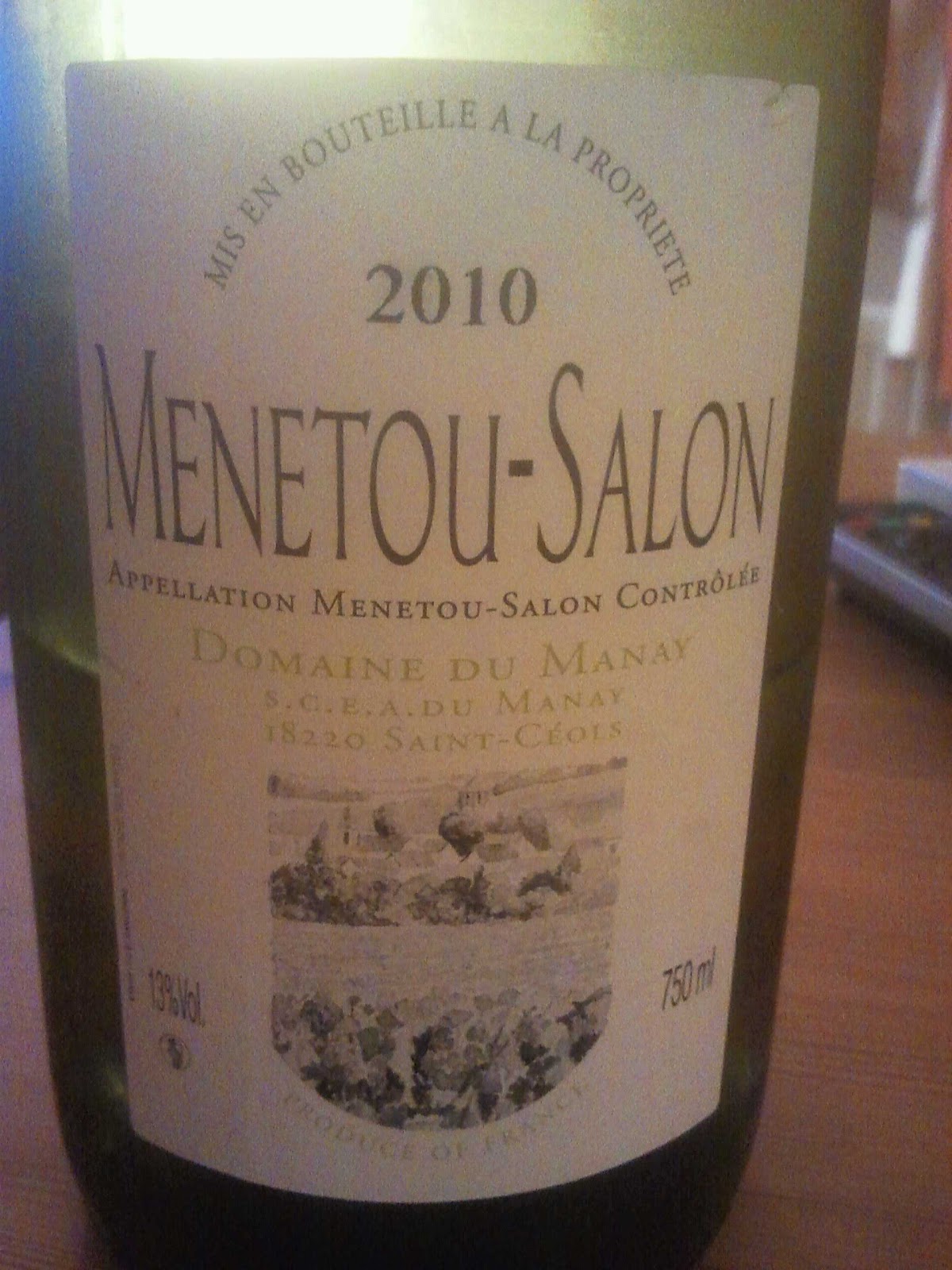 And so we come to Menetou-Salon another lesser known appellation from the Central Vineyards of the Loire. Although better known than Quincy it is very much the little brother of Sancerre. I don't believe I had seen or tasted it until a couple of weeks ago. It is also a lovely Sauvignon Blanc with a hint of spiciness and a palate of traditional citrus fruits and white flowers. It sent me scurrying to my notes from my WSET exams and their maps of the Central Loire. There are several appellations that are even less known to us than those already described. Next on my list to try must be something from the Coteaux de Giennois or Reuilly. 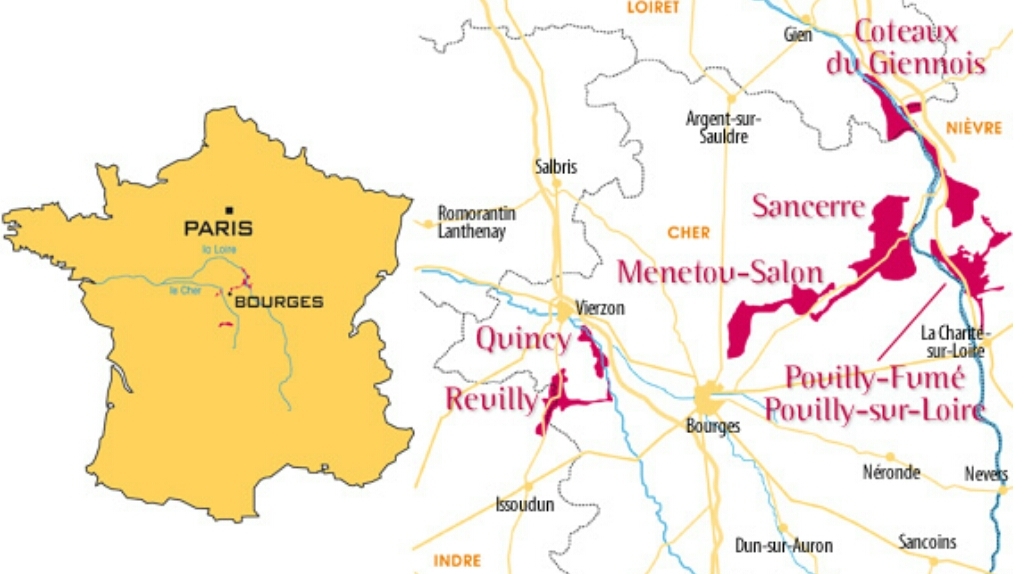 Next Time:
Why buy two glasses, when you can get the bottle. Oh, and my mother-in-law Norma.

A couple of months ago I celebrated a fairly significant birthday milestone and was given some lovely gifts by my friends and family. One of the most interesting was a bottle of Brazilian wine. I know, Brazilian wine, who knew?

It was given to me by my friend David. Actually, David is more of a long standing friend of my wife and sister but I have also known him a long time. He works in the 'trade' as we call it, so often has access to rarities and curios when it comes to wine. I hope he won't mind me saying that not everything he has given me has been a winner. On a couple of occasions I have emptied a bottle of plonk down the sink that has turned orange from oxidisation, however most of the time they are little gems that you would rarely see in any supermarket. With that thought in mind I would like to thank him for the bottle of Cloudy Bay Sauvignon Blanc he got for me last Christmas.

﻿﻿
But Brazilian wine was something else. I didn't even know they made wine in Brazil, or if they did, that they exported it to the UK. It turns out they do, and seemingly in increasing quantities. I wasn't entirely sure what I had, something for everyday drinking or to wait for a special occasion. I'll do some research online I thought. The bottle in question was a Miolo Lote 43 Cabernet Sauvignon-Merlot from 2005. The only review I could find was very complementary so I thought a dinner with my parents-in-law, who like a fine wine, would be a good event to serve it. For those that follow me on twitter you may have seen my tweets from that day. I opened it a couple of hours before time giving a good amount of breathing time and I have to say it was delicious, an intense blackcurrant hit with a touch of spiciness to boot.

﻿﻿﻿﻿﻿﻿﻿﻿﻿﻿﻿﻿It got me thinking. I love Chilean wine and I'm beginning to like Argentinian wine (leaving aside football and Falkland Island sovereignty issues) but at some point in the past nobody in Britain really drank any South American wine. In 2010 123million litres of wine was exported to the UK from Chile. Britain imported more Chilean wine than any other nation. This may have been the high watermark as our imports reduced to 107m litres in 2011 just below the level of the United States. Even so our passion for South American wines is massive and in the last couple of years Malbec from Argentina has also become popular so why not Brazil. At present there is only 12,000 hectares of land under vine in Brazil compared with 117,000 in Chile. But I can only see that increasing and with it the amount exported to the UK which is only around 80,000 litres annually at present.

So if Brazilian wine does take off in this country over the next few years enjoy, and just remember you read about it here first. Thanks for reading.

Next Time:
Quincy. The wine, not the seventies TV show. Oh, and Menetou-Salon too.