Have you heard of the Côtes de Bourg? Well of course you should have if you read my previous blog! Joking aside unless you are a Bordeaux wine aficionado or have maybe visited the area I doubt it. In fact the Côtes de Bourg is one of the 54 appellations of Bordeaux and possibly one of it's least well known.

It is situated 35 km (22 miles) to the north of Bordeaux on the 'right bank'. In this case right bank means to the east of the Gironde estuary, whereas 'left bank' means to the west. This is actually an important distinction because due to the soil and climate, or 'terroir' as the French like to call it the 'right bank' tends to be Merlot dominated and the 'left' Cabernet Sauvignon.

I holidayed in the area in July and was absolutely fascinated by the wine production there and it's neighbouring appellation the Côtes de Blaye. This area is certainly not one of the glamour parts of the region like the Haut-Medoc or St Emilion. More a workaday region producing wines mostly drunk locally and by the tourists that pass by. The towns of Blaye and Bourg are lovely places to stay and if you want to go and visit the more prestigious wine places St Emilion is just over an hour away by car (We did) and the Haut-Medoc even closer if you catch the Trans-Gironde ferry (We also did) which departs right from the centre of Blaye.

The Côtes de Bourg styles itself 'The Spicy Side of Bordeaux'. Not entirely sure how true that is, after all we are talking mostly Merlot here not spicy Syrah. However the wines do have a slightly more tannic bite.

But it is the scale of production that I want to get across to you. When driving around the area the vineyards seem to go for mile after mile after mile (sorry kilometer, we are in France after all). The total area under vine is just under 4000 hectares producing. The famous Napa Valley of California has only 17,000 hectares of vines and Marlborough in New Zealand 22,000. Not that small then for a region you've never heard of and the wines virtually never come to the UK or much beyond French borders. 85% is sold in France. 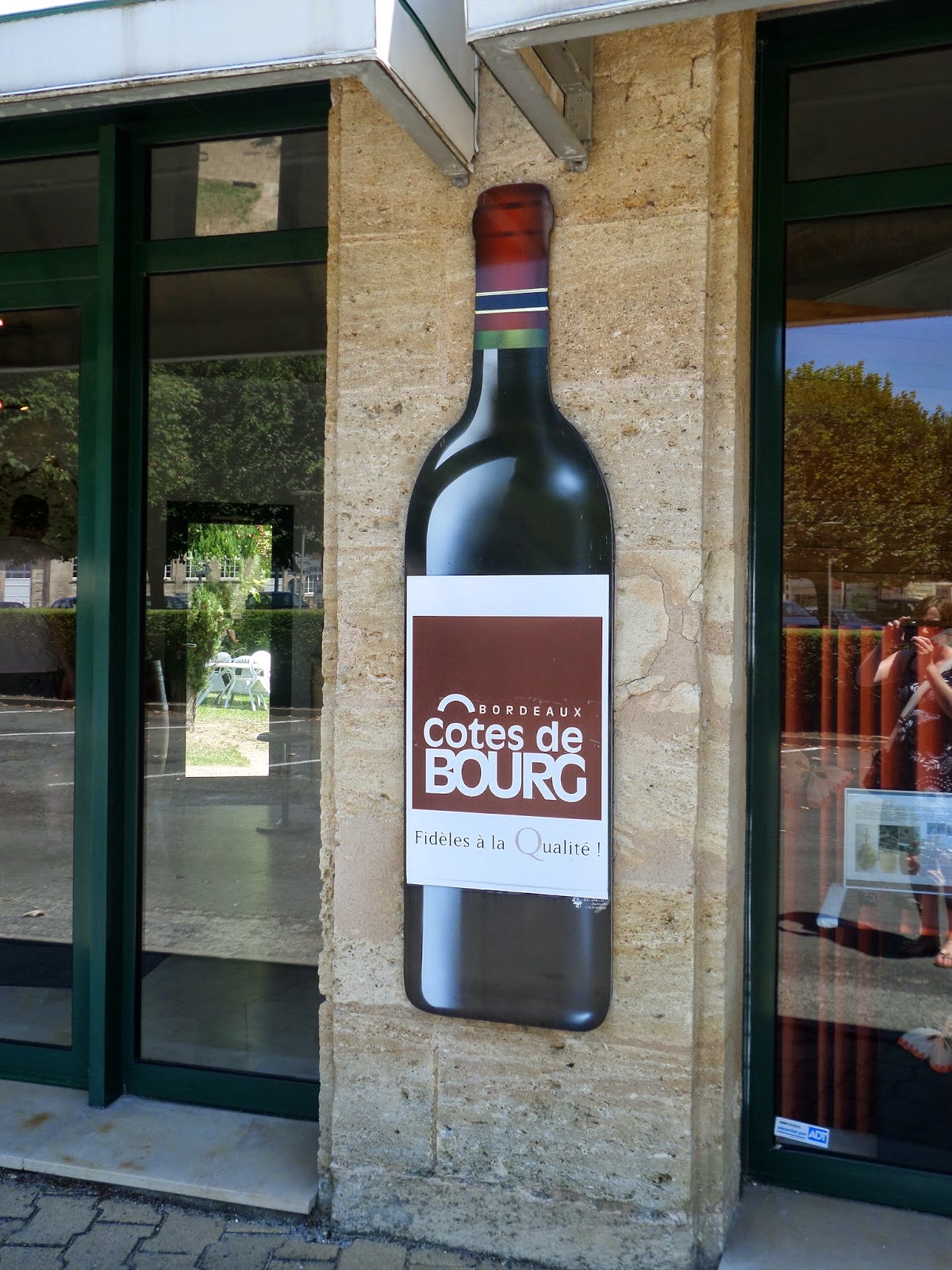 Mere statistics do not tell the whole story though. Wine is such a way of life in France that when visiting a wine producing area you cannot escape the seductiveness of it. We visited the small town of Bourg, took lunch, and then visited the Maison du Vin. Most towns in the area have these. These, literally, 'houses of wine' showcase all of the local wines and very often beautifully presented.

And finally we come to the best thing of all, the wines are so reasonable to buy. Of 134 wines available 91 were under €10 (£8 or $13) many around €6. And remember these 134 wines come from an area that is small outpost of the whole Bordeaux wine spectrum. 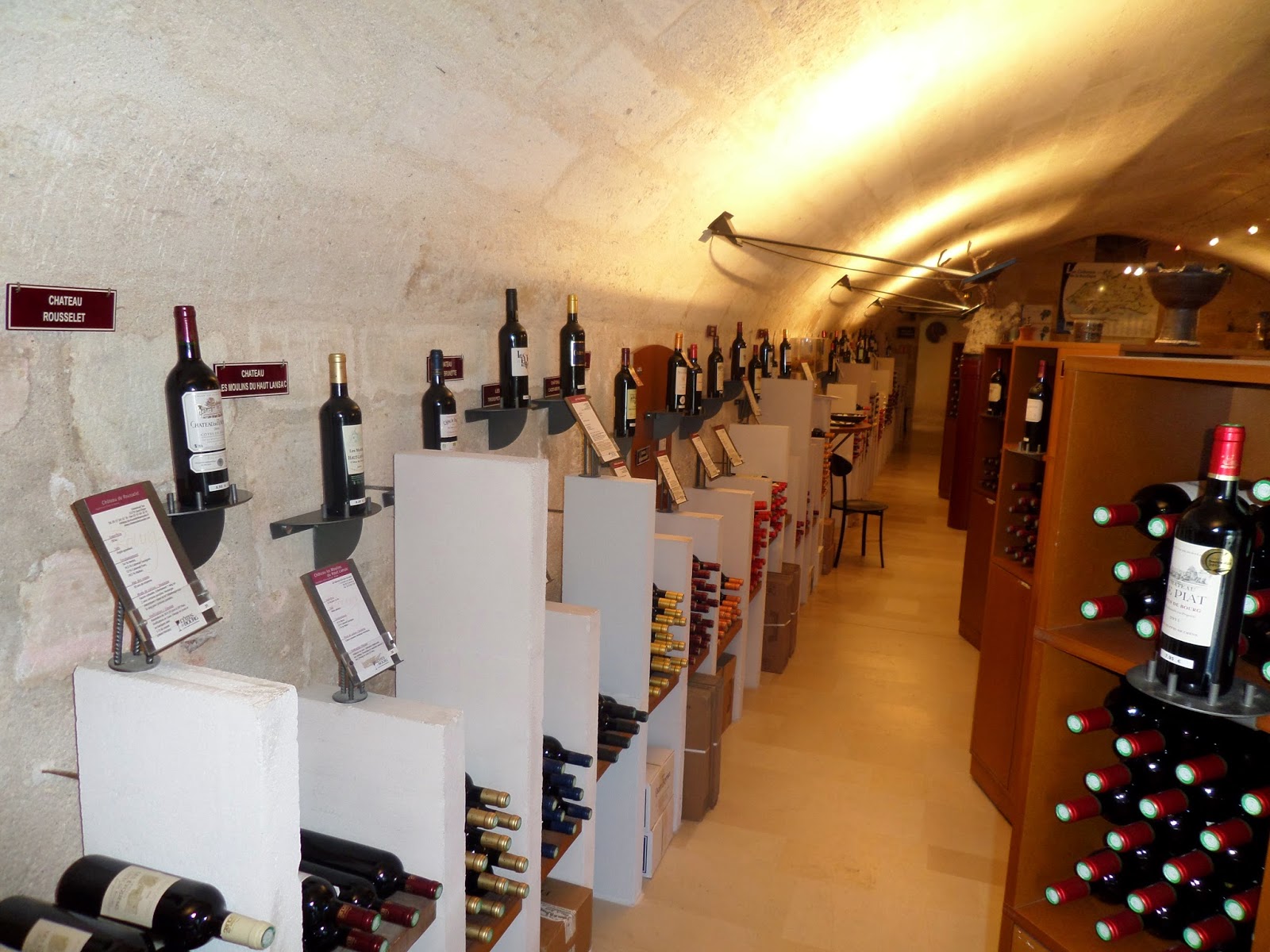 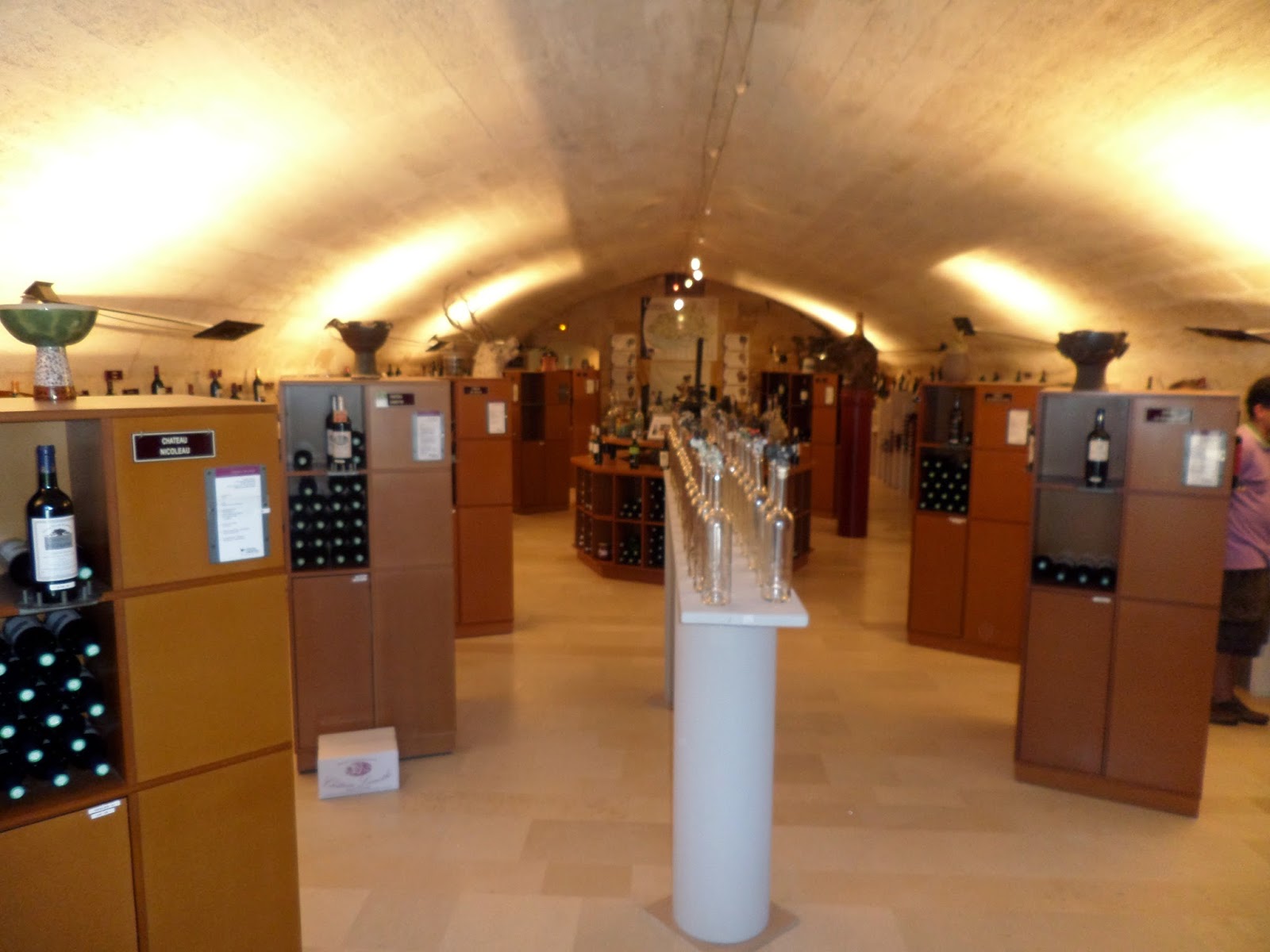 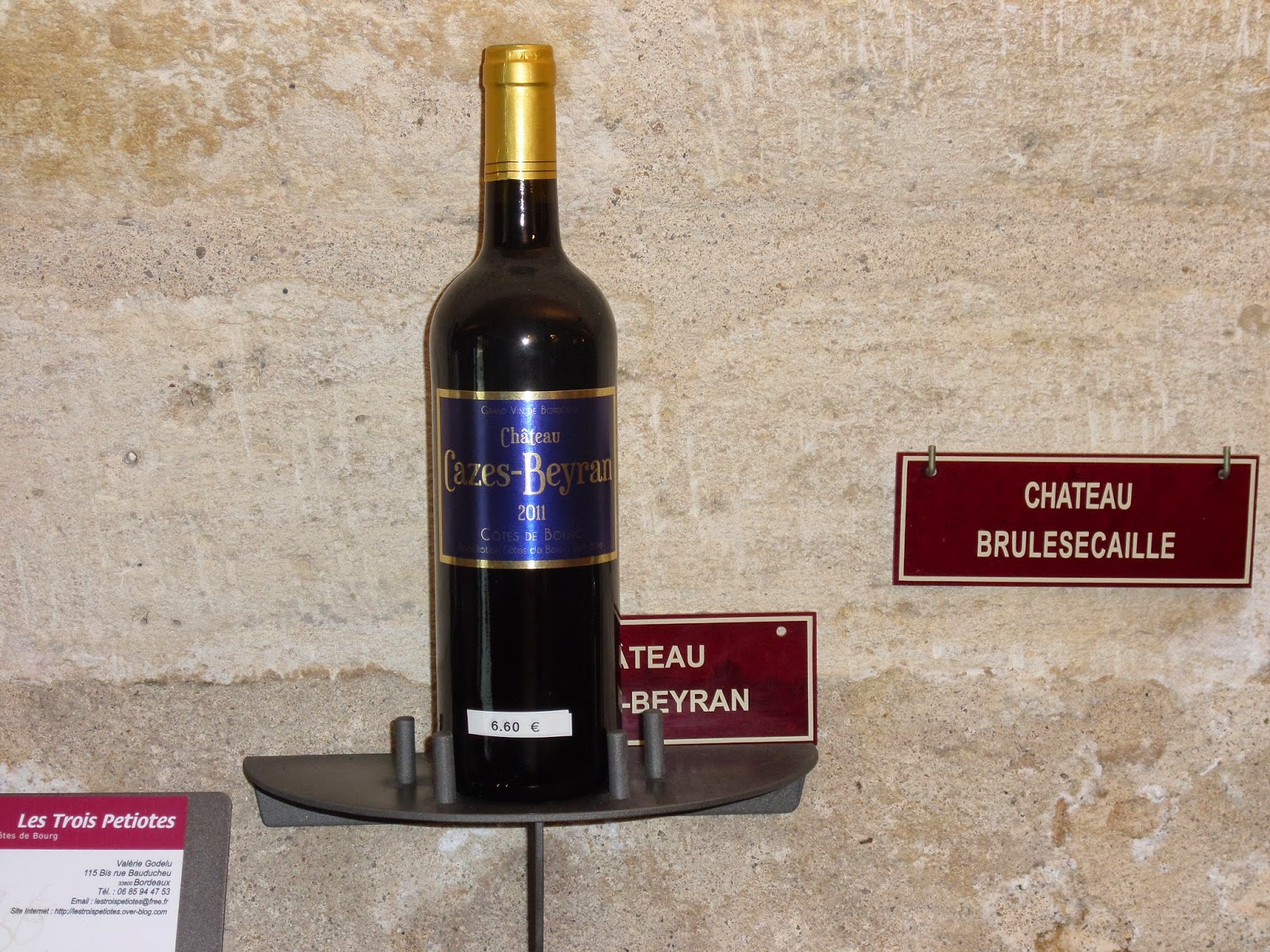 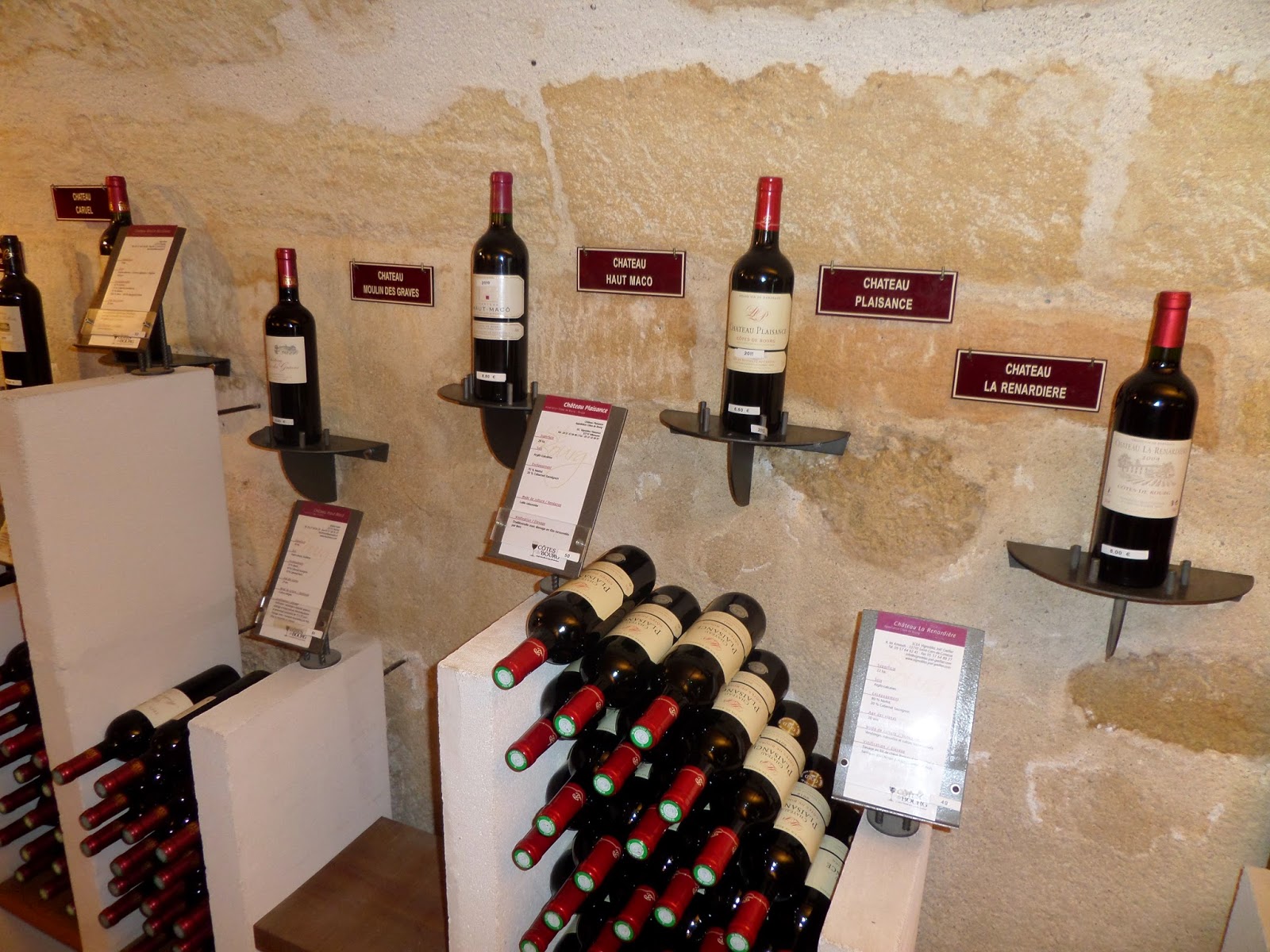 As you can see from the photographs the Maison was beautiful inside and a pleasure just to wander around admiring the bottles. I should say it was also nice and cool inside on a scorching hot day! More information about the Côtes de Bourg can be found at the tourism website www.cotes-de-bourg.com.

Next time I shall be recalling my visit to the Chateau Monconseil-Gazin vineyard in the nearby Côtes de Blaye.

Until next time. Enjoy your wine.
Cheers!
Simon

Well, it certainly is a big topic, one that has had thousands of books written about it and I could not possibly do it justice in one of my short blogs. As you may be aware I visited Bordeaux for a holiday last month and this is intended as the first of a series of blog on my time in the region.

Bordeaux as a wine producing region is vast, so vast in fact that the amount of wine produced here would rank 10th in the world if Bordeaux was as a country. It produces 675 million litres of wine a year (That is 900 million bottles!). That is 3 times the amount that New Zealand produces.

The comparison with New Zealand is rather apt because 'Kiwi' wine has become very popular in Britain just as sales of French wine have declined in recent years. According to latest Nielsen data 1 in every 5 bottles over £7 is from New Zealand.


But it wasn't always like that. Bordeaux and England have a long association going back to the 12th century when Eleanor of Aquitaine married Henry Plantagenet, the future King Henry II. Bordeaux was in the control of the British for almost 300 years and it was during the time of Richard the Lionheart, son of Henry and Eleanor that drinking the wines of Bordeaux really took off. Between the end of the Hundred Years War in 1453 and the First World War (1914-1918) Bordeaux boomed and much of the wine was exported to Britain as well as the low countries. The Dutch had a major influence as its engineers drained the marshy and swampy Medoc left bank home of the most famous wine names of the region today.

The classification of the wines was started in 1855. You will often hear me refer to '1855 and all that...' It's a flippant remark and the subject actually deserves a blog all on it's own. Typing 1855 classification into Google gets you over 12 million results. It's actually one of the first things you learn about at wine school, Bordeaux usually being the first region to be covered.

The classification of AOCs (often ACs) or Appellation d'Origine Controlée started in the 1930s and
continues to be occasionally modified today. The literal translation is 'controlled designation of origin' and it ensures that to be labelled with a particular are the wine must be made in a certain way with regard to the grape types, maturation period and type of maturation for example.

These stiff rules have become restrictive to the winemakers leading to wine from the new world such as Australia, Chile and the aforementioned New Zealand where there are less restrictions on experimentation becoming popular at the expense of classic Bordeaux 'Claret'.

Just the phrase 'Claret' itself is a British invention. It derives from the French word 'clairet' meaning dark rosé which was the typical style of wine exported to Britain during the 12th - 15th centuries. It is a protected word but I prefer not to use it and you will never see it used on a label.

What you will see is a bewildering array of information including the appellation the wine is from, (See the map opposite) but never the actual grape variety which I am sure is one of the principal reasons why the new world has usurped France and Bordeaux in sales.

I spent most of my week in on holiday in the Cotes de Blaye and Cotes de Bourg. I would guess most of you reading this will not of heard of those areas. It is true that they are not the most well known of the Bordeaux appellations but to actual see the rolling vineyards going on for mile after mile is an awe inspiring sight. In my next blog I will tell you a little more about the Cotes de Bourg.

Until next time, enjoy your wine.
Cheers!
Simon

Posted by Unknown at 3:04 pm No comments: